We perform two variants of hormonal stimulation to adjust it to each individual woman. Dependent on the method the fertility treatment takes between 4 and 10 weeks.

Hormonal stimulation of the ovaries should cause multiple eggs to mature at the same time. The body’s own hormones have to be reduced, for the supplemented hormones to work optimally.

The egg cells’ maturation in the natural cycle is caused by the “follicle stimulating hormone” (FSH). This FHS is also contained in drugs for stimulation of egg cell growth.

Medicine that slows down the woman’s endogenous hormone system

There are three possibilities here:

The hormone stimulation starts at the second day of the cycle; while from the 7th day onwards the antagonist medication will additionally be injected subcutaneously, causing a decrease of endogenous hormones

The medication is injected into the fat tissue previous to the actual hormone stimulation (in the midst of the cycle), where it will slowly spread throughout the body over 3 weeks. The decrease of the body’s own hormones will be monitored regularly during this period of time.

The medication is taken at the same time of the actual hormone stimulation via nasal spray.

Depending on the woman’s preliminary results downregulation or flare up qualify as the better option. The growth of the follicles, which each contain an egg cell, is stimulated roughly 10-14 days by the medication. The number of egg cells depends on the woman’s initial situation and the dosage of hormones.

To judge the follicle’s maturity level, we measure their size by ultrasound. The ultrasonic probe is inserted into the vagina to have a good view on the ovaries.

The follicles have matured when they reach a diameter of around two centimeters. At the same time, we use the ultrasound scanner to measure the thickness of the endometrium that increases through the hormone stimulation as well. This is necessary in order for an embryo to implant and a pregnancy to occur.

The concentration of the hormone estradiol also indicates the maturity level of the egg cells and is measured in a blood analysis. 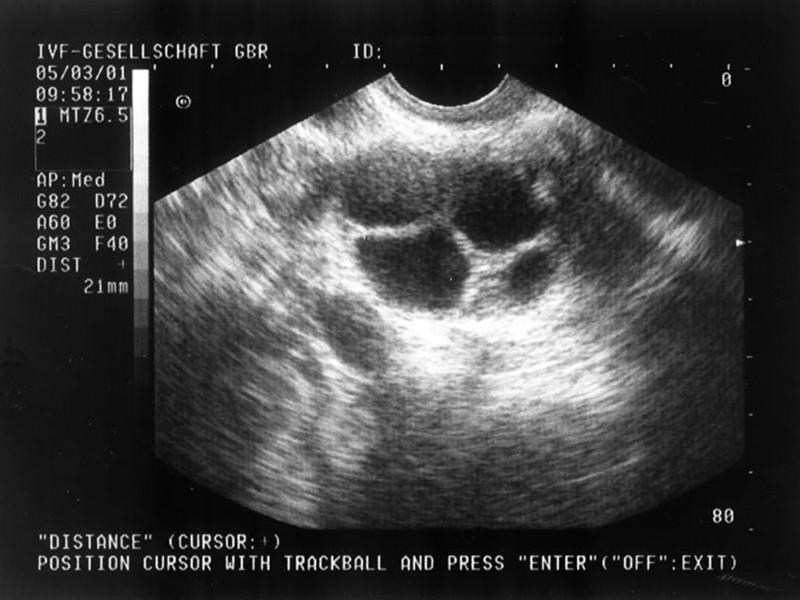 Ultrasonic picture of an ovary with many several follicles 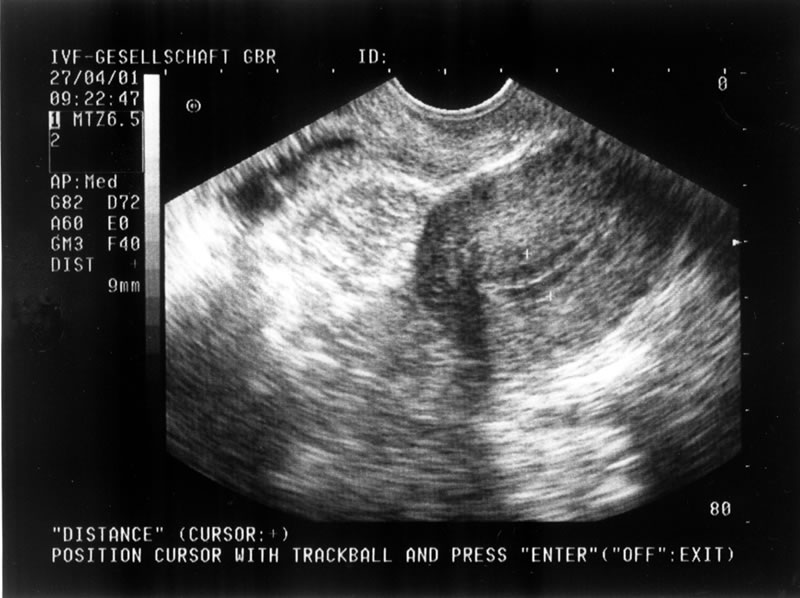 Ultrasonic picture of the womb

In the natural cycle the egg cell is released from the ovary under the influence of the body’s own hormones, by the follicle bursting and the egg cell being incorporated by the tubes. In the stimulated cycle ovulation is induced artificially by the injection of the hormone hCG. Under effect of this hormone, the egg cell proceeds its maturation again, which is decisive for it being able to be fertilized by a spermatozoon. 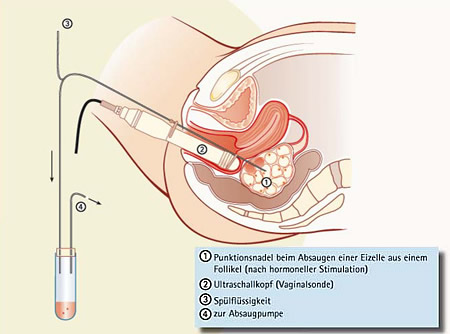 During the IVF therapy, the follicle puncture is scheduled in such a way that the egg cell is retrieved right before ovulation. This is possible because the timeframe between hCG injection and ovulation is very constant. It takes about 35 hours.

The retrieval of egg cells takes place right before ovulation, with a small surgery called follicle puncture. The procedure takes about ten minutes and is executed while the patient is under a mild general anesthesia, so that she does not feel any pain. The doctor punctures through the vaginal wall into the neighboring follicles and aspirates the fluid containing the egg cells. The egg cells are then isolated, with the aid of a microscope, in the laboratory and are further cultivated in an incubator.

Besides the egg cells, the fertilization in an IVF therapy requires sperm. In Germany only those of the husband or a stable non-marital partner are allowed.

The World Health Organization (WHO) has defined reference values for what is considered normal semen quality: 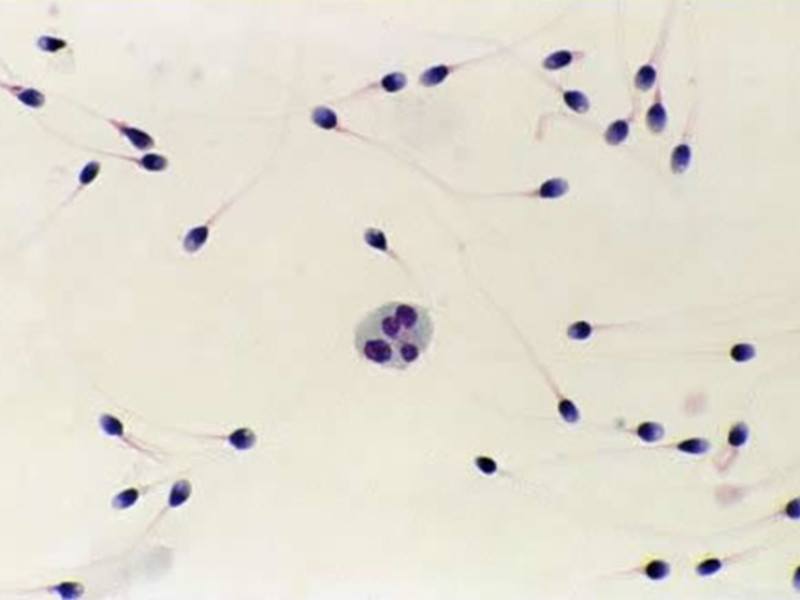 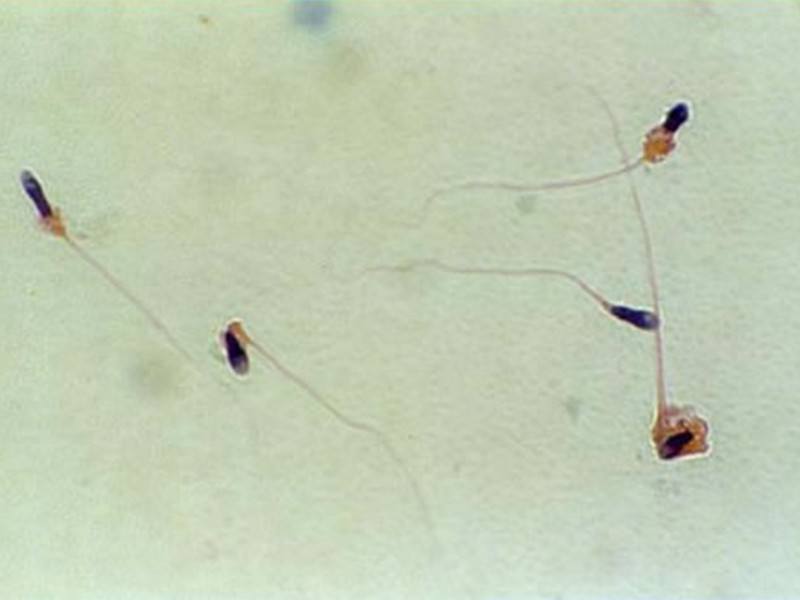 A preparation is performed to isolate the fastest and most mobile sperm from the seminal fluid. Oftentimes the swim-up method is applied in which the most mobile sperm actively swim into the nutrient solution. 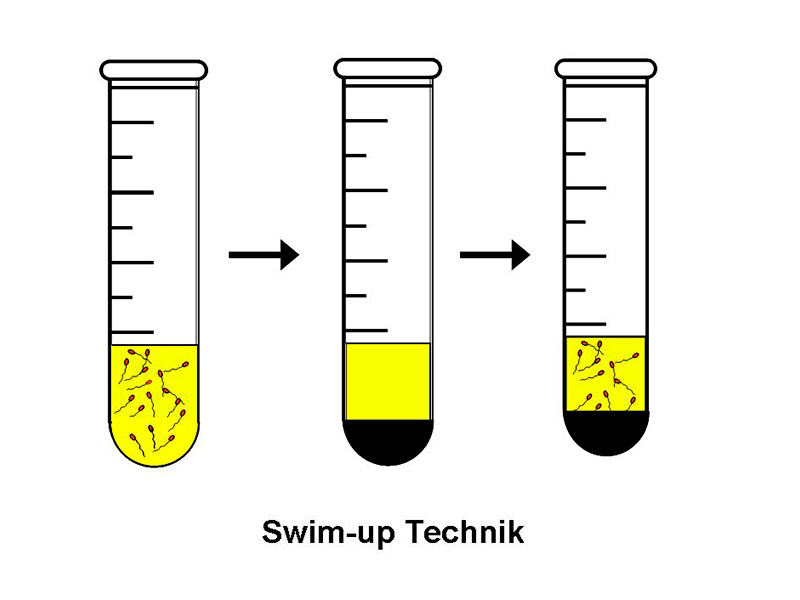 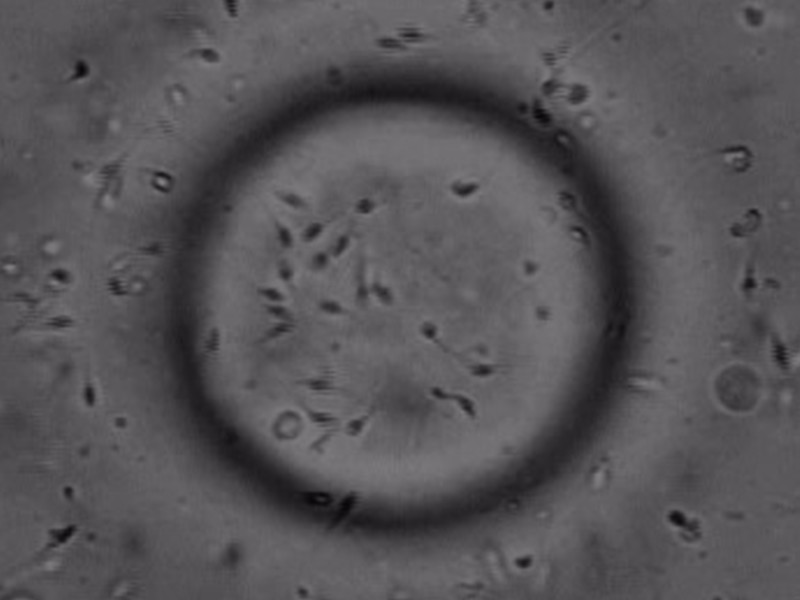 The egg cells that were acquired through follicle puncture are stored in a culture medium inside an incubator and are brought together with the partner’s sperm after about three hours. Depending on the quality of the semen, i.e. the concentration, mobility and morphology of sperm, two variants of insemination of the egg cell are applied:

In conventional IVF, the semen quality of the man is normal or only slightly limited. The sperm cells can therefore penetrate and fertilize the egg cell on their own. Technique: The man’s seminal fluid is processed. The result is a suspension of highly mobile sperm. This suspension is added to the egg cells in a certain concentration. They stay there overnight, until fertilization can be checked after 18 hours. 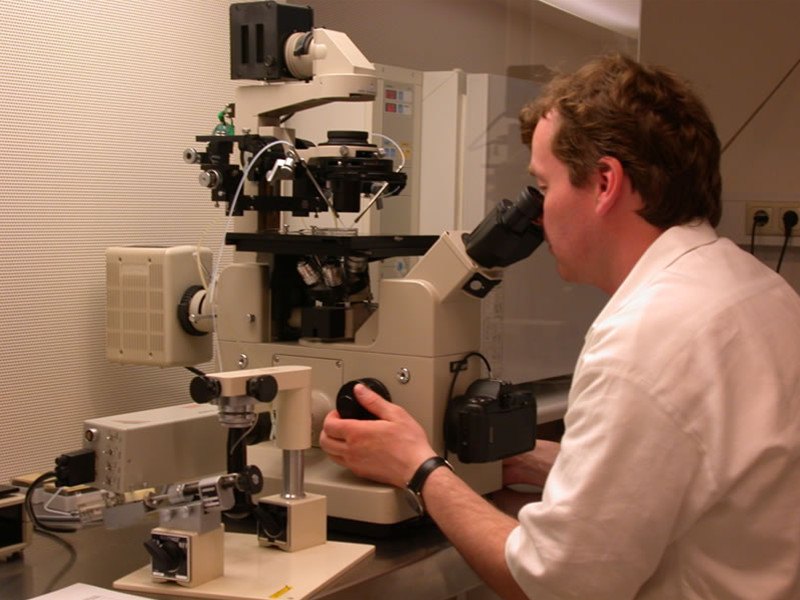 ICSI (intracytoplasmic sperm injection) has to be applied when the man’s semen quality is severely limited. This can mean that the concentration, motility or the morphology of sperm cells is severely limited. The spermatozoa can therefore not penetrate the egg cell on their own. Technique: A sperm cell is drawn into a tiny glass injection capillary and injected into the egg cell. The egg cell is fixed with a slightly bigger holding capillary. To give a better idea: The diameter of an egg cell is about a tenth of a millimeter, comparable to the diameter of a human hair. That makes the egg cell the biggest cell in the human body. Contrary to that, spermatozoa are among the smallest human cells.

These terms are abbreviations that refer to the origin of the sperm. In both cases there are no sperm cells present in the man’s ejaculate, so that sperm are acquired through a small surgical procedure either out of testicular tissue (testicular sperm extraction, TESE), or the epididymis (microsurgical epididymal sperm aspiration), by urologists or andrologists. These are usually cryopreserved and can be used in a normal ICSI treatment. 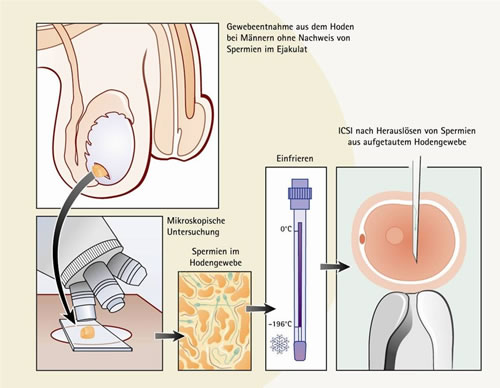 The morning after the follicle puncture we check how many egg cells have been fertilized by sperm.  Usually the fertilization rate is about 80%.

Under the microscope one nucleus with the maternal and one with the paternal chromosomes is visible in the fertilized egg cell. These cell nuclei meld to a single nucleus over the course of the day: That of the embryo.

In Germany a maximum of three embryos are allowed to be transferred according to the German embryo protection law. 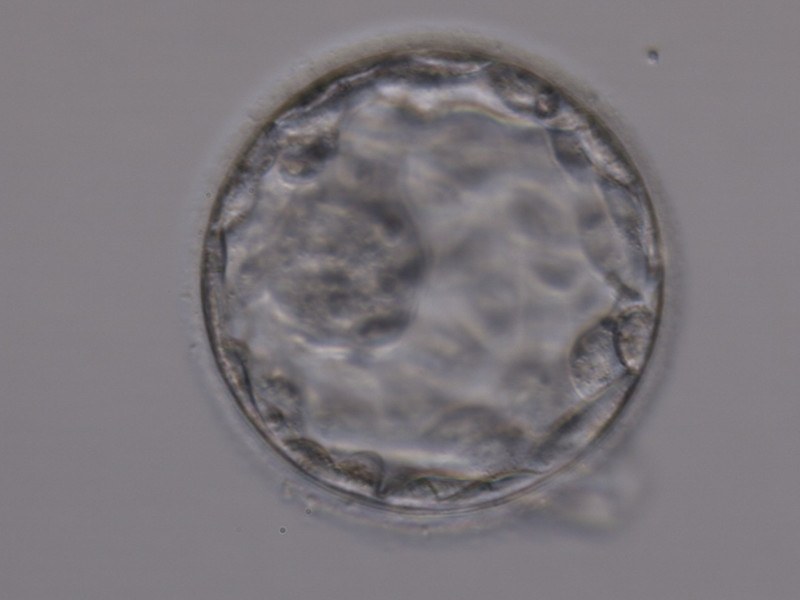 Embryo at the blastocyst stage

Embryo transfer is a very easy procedure that takes about 5 minutes. It is painless and is executed without any anesthesia.

In the laboratory, the embryos together with some culture medium are drawn into the transfer catheter. The doctor then inserts the catheter, through the cervix, into the uterine cavity. Afterwards the embryos are released into the uterus.

The volume of the inducted fluid is very small: It accounts for about 20-30 microliters (millionths of a liter). 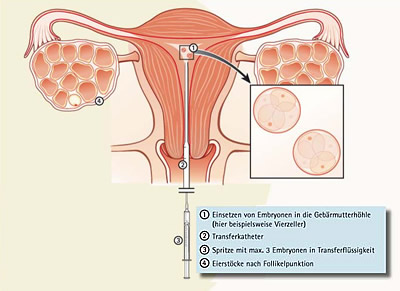 The last phase of fertility treatment is often experienced as the hardest one by patients: Waiting for the pregnancy test. Despite the tension, try to indulge yourself and avoid stressful and physically taxing situations. Try to live your life as usual since: You are not sick, but hopefully pregnant soon!

Definitely go to the doctor for a pregnancy test at the calculated date. He will need to take a small blood sample.

A precocious pregnancy can lead to bleeding as well. That means if bleedings occur even prior to the calculated date:

With our experience we stand by your side to show possible ways to fulfil your child wish. With pleasure, we would like to inform you in a personal meeting about possibilities of treatment, their prospects of success and risks.

We offer consultation hours with a Russian speaking employee for translation on demand.
In emergency cases we are available until 10pm via mobile.